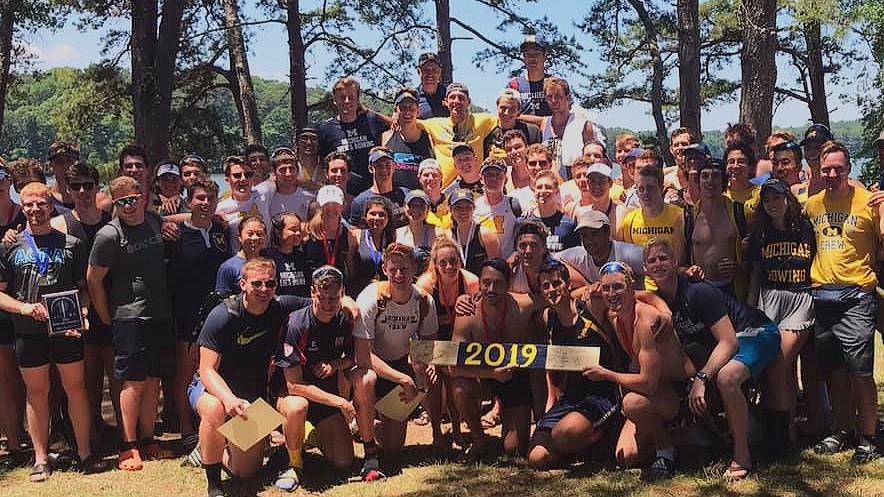 Gainesville, GA – Over Memorial Day weekend the Michigan Men’s Rowing Team made its perennial trip down to Gainesville for their final regatta of the season, the ACRA national championships. The weather for the final practice on Argo Pond Tuesday morning was in the low 40’s, and the racing in Georgia was in the mid 90’s. This year the ACRA has changed to a 3-day format to create more flexibility in the schedule and to accommodate future growth. The new schedule ensured that nearly everyone raced heats, semi-finals and finals on different days.

During the finals racing on Sunday, the Varsity Pair and Varsity Double both won their petite finals. As the day’s racing progressed, Michigan continued to pile up the medals. The Lightweight 4+ won the teams only ACRA gold medal. The Varsity 8+, Second Freshman 8+, and Freshman 4+ all received silver with the Freshmen 4 missing out on gold by a mere 0.034 seconds. The freshman 8+ received bronze behind OCC and Virginia. The rest of the grand final races resulted in a 4th place by the second Varsity 8+, 5th place by the Varsity quad, and a 6th place finish by the Varisty 4+.

With these results the Michigan Men’s team took home not only their medals, but also the Overall Points trophy, the Men’s Points Trophy, as well as the Small Boats Points Trophy. The Michigan rowers then returned to Ann Arbor and dispersed for the summer. Although the Season was over for most of the team, 14 athletes are continuing their training for the 2019 Henley Royal Regatta in England in early July.

Full results for the 2019 ACRA regatta can be found HERE