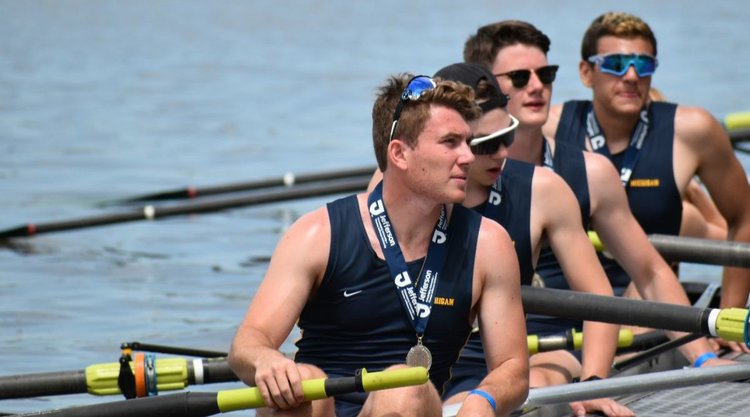 Philladelphia, PA – On the second week of May, the Michigan rowers took their perennial trip to the Schuylkill to compete in the Dad Vail Regatta. Since April 28, the MACRA Championships, the Wolverines were firing on all cylinders in anticipation for this regatta. In their morning time trials the wolverines stacked up well against the various Division 1 Varsity boats they competed against. These were encouraging results for the team.

The semi-finals started well with the pair, the Lightweight 4+, the Frosh 4+, the Freshman 8+, and the Second Varsity 8 all qualifying for the grand finals with the First and Second Varsity 4+ qualified for the Petit finals. For the last semi-final of the day the Michigan Varsity 8 put up the 3rd fastest time of any crew in the semi-finals, unfortunately it was also the third fastest in their heat - losing out on a spot in the Grand finals by 0.06 seconds to Temple.

In the Finals, Michigan's Pair, Lightweight 4+, Novice 8+, Second Varsity 8+ fought hard against a field of Varsity programs coming up just short of a medals - all finishing 4th in their races. The Freshman 4+ won silver behind Colgate College, representing Michigan's only Dad Vail Medal for 2019.

After two days of racing in Philadelphia, the team loaded into their vans to head to Worcester, Massachusetts for the second regatta of their weekend.