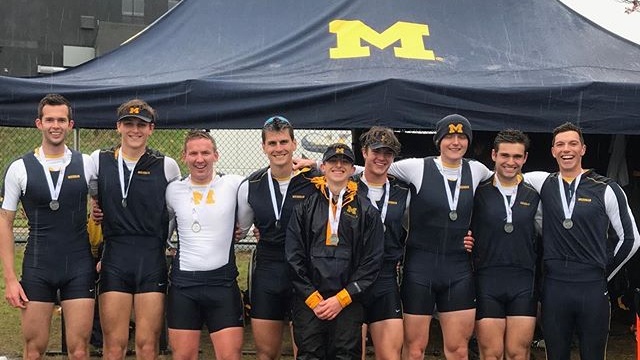 Worcester, MA – Barely 15 hours after finishing the last race in Philadelphia, the team was racing its first heat in Worcester Massachusetts for the ECAC regatta. The weather at Quinsigamond was rather unwelcoming with temps in the low 50's and a steady rain which lasted throughout the day of racing. The Michigan Team fielded six 8+'s. The ECAC regatta does not have Novice entry categories, so the 1F was slotted in as the 3rd Varsity A and the 2F as the 4th Varsity B. The Freshman 4+ which won silver earlier in the weekend in Philadelphia was entered in the Varsity 4 category.

With the heats in the morning, the 1V, 2V, 3V(A) and the Varsity 4 all progressed to the grand finals, with a 3V(B) progressing to the petite final. The 4V race was a finals-only race. Encouraged by strong performances in the heats by all Michigan crews, the team went into the afternoon finals in the cold rain with strong determination. The first Freshman 8, which raced as the 3rd Varsity garnered a Bronze medal behind Hobart and Boston College. The Freshman 4 which raced in the Varsity 4 category came away with the gold medal, coming in 10 seconds ahead of the Boston College varsity crew. The First and Second Varsity 8's both earned silver medals behind fresh Hobart crews.

With the depth and competitiveness of Michigan's crews, Michigan won the team points trophy with 231 points over Boston College's 217 points.